When I was a child, I spent my days drawing alone and playing with my pet dogs and cats partly because I was raised in a single-parent household with a brother much older than me. My dream back then was to become a [painter], yet I locked away painting from my life due to my mother’s objection. As I grew older, what brought me a sense of incompleteness after all was my regrets of not having been able to draw as much as I wanted. I tried to find a class where I can learn from the basics, but I ended up having the idea that learning under a teacher would deprive me of freedom as I might simply pick up the teacher’s style of painting. So I decided to draw a picture a day instead. I did so because I had a feeling that it would bring me to realize something eventually. As I kept on drawing still-life paintings, landscape paintings, and figure paintings, I started to think about how great it would be if I can draw what I truly love: cats. Since then I have been drawing pictures of cats every single day, but it is not an easy thing to do and my works are still far from perfection.

I have been doing calligraphy since I was 9 and now I teach classes on it. The main subject matter of my works in calligraphy had been Chinese poetries from the Tang Dynasty, but then I realized that I cannot make pieces of work just out of them hence started to write Chinese poems and Japanese essays such as “Makura no Soshi (The Pillow Book)” and “Tsurezuregusa (Essays in Idleness)” into a shape of a moon. By doing so, I found myself creating something way closer to the pieces that I have always pictured in my mind. That was how this piece “Suuseiryu~Makura no Soshi” was made.

Since then I had been wondering if there is a way to integrate cats and calligraphy in my works because I do calligraphy alongside painting daily. There are so many times when I get some inspiration while I am out on a daily run. Then I came up with this idea of “Tsuki Neko (Moon-cat)”. I have recently been drawing a lot of pictures of Moon-cats in kimonos. I had my very first solo exhibition in the gallery in Taichung from September to October this year. It was very unfortunate that I could not visit there due to the present COVID-19 situation, as I was supposed to carry in and out my paintings to the gallery and do “a live performance” in the opening ceremony as well. The exhibition has been a major success with triple-digit revenue, despite its reservation-only system and limited number of visitors because of the pandemic. I feel like I got a step closer to what I have dreamed of as a child. 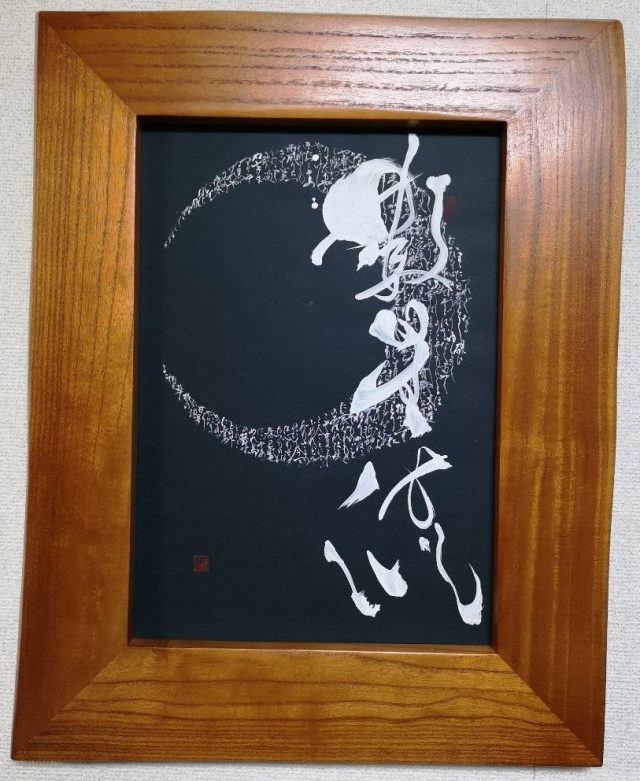 That being so, there are many people who are better than I am in both drawing cats and writing calligraphy. However, having received some comments that my paintings reflect my love of cats and calligraphy, I came to realize the importance of “drawing from the heart!” Another thing that matters, I suppose, is connection.

One of those who purchased my piece at the art fair in Taipei last year was from Taichung. This person was the very person who introduced me to the owner of the gallery I had my solo exhibition at. Also the person who purchased my painting at the two-person exhibition in Yokohama Takashimaya last February happened to be from Taipei and even sent some flowers to this gallery. It is not too much to say that these connections brought me to where I am now. I think it is by being connected to people that our lives move from one phase to another. Now everyday is so much fun, as I see my childhood dreams come true little by little. I am realizing that dreams do come true if we keep on persistently pursuing them.