I was born in Nanao, Ishigaki and raised in Yokohama, Kanagawa. My antique-loving mother collected daily commodities and artworks (especially pottery and dyed goods) from the Taisho period and the beginning of the Showa period. I have memories of joining my mother in collecting these wonderful artworks from permitted warehouses. As a result, I was raised with artworks as a part of my life.

I have always loved drawing, but I became particularly interested in fine arts when I entered middle school. It was because my middle school art teacher, “Ken sensei” was a very funny person. During class, Mr. Ken would play different genres of music from J-pop to classical music. Thinking about it now, he was doing a pretty audacious thing… “Don’t limit yourself, think and express freely, and have fun!” I still remember it being that kind of class. I also learned about Japan’s brilliance through art. “Japan is a small country, but there are many precious artifacts in each region. You guys should take pride in this country’s excellent techniques and knowledge.” I will never forget those words. I could honestly say that “Japan is amazing!!” From there, I started my full-scale art activities♪

An encounter with a wonderful teacher (person) can change your life…

I entered high school, and was unable to draw whenever I wanted. I experienced what every creator experiences at one point: a period of creative slowdown. When I was stuck with the endless dissatisfaction of my drawings, I watched the movie, “Kiki’s Delivery Service.” There was a scene where the protagonist, Kiki, was struggling because she “could not fly with her broom.” I saw the same struggle and the same low spirit and I realized, “she’s… just like me…” There were several lines in the movie that went,

“Yea, I don’t need to always draw.” I remember feeling more calm after hearing those lines. After that, I stepped away from creating, and went on walks, visited art museums, and watched movies to pass time. My hometown, Yokohama, is known for its diversity, so you can hear a variety of music playing in the streets. I was inspired by jazz, reggae, house music and other music genres and learned how different countries think and live. I eventually became obsessed with Backstreet Boys, and my hatred for English gradually turned into interest.

For college, I entered Joshibi University of Art and Design. I felt that “Art is not simply about self-satisfaction! I have to gain more knowledge and learn more techniques!” As soon as I entered, I was surprised to see professors who were famous and active in the media. I especially remember the artists, Yoshitomo Nara, and the movie director, Takashi Yamazaki. They both gave very inspiring and exciting lectures with lots of discoveries. Around the same time, I was influenced by modern artist, Damien Hirst and painter, Sam Francis and was fascinated by their form of expression, technique and color senses. I have memories of copying their artworks to learn their techniques. Learning various methods of creating art and putting all my time and effort in creating, the 4 years in art school were the best years of my life. It was a time when I was able to fully commit to art and I believe it was the most precious moment of my life.

I became a working member of society, and joined a design firm. However, even though my creations were out in society, I entered a period where I was not happy and my head was always foggy. It was because my creations were based on the clients’ preference. Most people will say, “Of course, it’s a job!” “The client is always right!” However, I soon realized that I wanted to create artworks based on my own accord.

While my head was still foggy, I was offered a new job. It was a position as a “Part time middle school art instructor,” which I have continued to do to this day. Initially, I was going to decline the offer. This was because both of my parents were teachers and I understood how difficult and laborious it can be. My mother once came home with an injury from a student. Even so, she has told me that “being a school teacher is fun” and continued to work for about 40 years. I eventually became interested in becoming a teacher and thought, “I should just experience it with my own eyes.” I quit my job and accepted the offer. 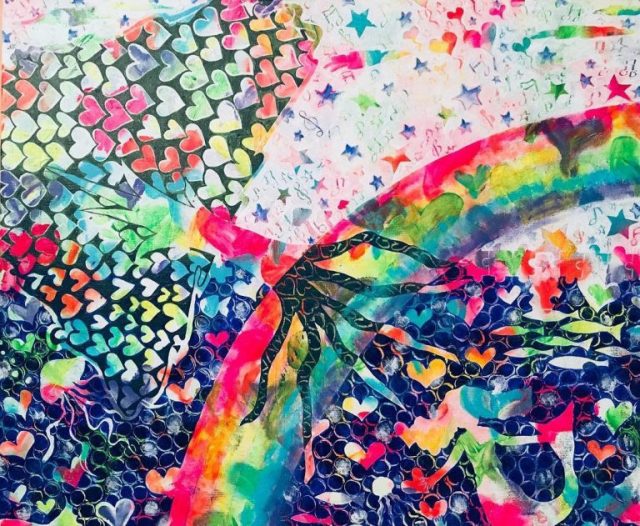 A tree of love

In the beginning, being a teacher was very difficult. I also deeply understood how inexperienced I was. To be quite frank, it was not something I should have done with the simple thought of “I should just experience it with my own eyes!” I could not understand my mother’s love for teaching. It came to a point where I began thinking, “I don’t want to go to school…” This was when I thought of the fun, middle school art teacher, Mr. Ken. “Yea… if this was just to experience it with my own eyes, why not try my best.” Instead of thinking of it as a school class, I focused my attention on making it a class that was fun for me. I felt my shoulders loosen and I saw my students become comfortable with me. I definitely believe that my initial classes were sad excuses of a teacher. However, I saw myself growing with my students through art and I gradually started to like my job as a teacher. After that, I took the Teacher Employment Examination, and received a full time position to teach to this day.

As a teacher, I have felt the gradual “depart from art.” As the key figures of our future, students are given less time to cultivate their aesthetic sensitivity, and art classes have reduced to once a week. I believe there is something that I need to do as an artist and a teacher. Within the limited time that I have, I believe it is my duty to teach “the magnificence of Japanese art” and “the magnificence of artworks around the world” to students who will lead the future. I continue creating and exhibiting to provide hope and courage to my students. In my art classes, I have used some pictures of my artworks that were exhibited in JCAT exhibitions. Whenever I show the students, their eyes sparkle with interest!

I hope people from around the world who see my work will connect with the students who lead the future. I will continue creating with the hope that art becomes a part of my students’ lives and that my existence helps students find opportunities and discoveries. For the future of Japan!