Art born from me, is another me.

My reason for drawing today is related to my childhood memories, when I got excited over my father’s casual drawing of a hero character.  I cannot remember what kind of drawing it was, but it is a fact that it led me to start drawing. I cannot thank my father enough for it.

When I just began drawing, I did not know what I wanted to draw. It seems that the sketches made during that time were thrown away when I moved. My art continued to develop as I was influenced by manga, anime, art, toys, and many other things. Out of everything, however, I especially remember being greatly influenced by the world-famous Dragon Ball and 2 artworks from Picasso.

During my school life, my textbooks were filled with scribbles, and would even draw behind test papers. For this reason, the more 0 points I got on tests, the more I immersed myself in art.  At home, the back of flyers became canvases, and I continued to draw on everything. I was a person who liked to draw more than anything.

I also love animals and bugs and would prioritize playing with insects rather than friends. From such an environment, I believe my sensibility developed and created my current creative eccentricity. I eventually started working as a designer, and learned the responsibilities of being a working member of society. Yet, even as I got older, my eccentric and humorous sensitivities stayed, which reassured me.

However, my art ideas were too far-fetched, and I was dissatisfied with my art activities in Japan. I entered various art competitions in Japan, but would get selected for an award, rather than getting awarded. Yet, I was rarely not selected, and at times when I got lucky with the judges, I would receive an award. 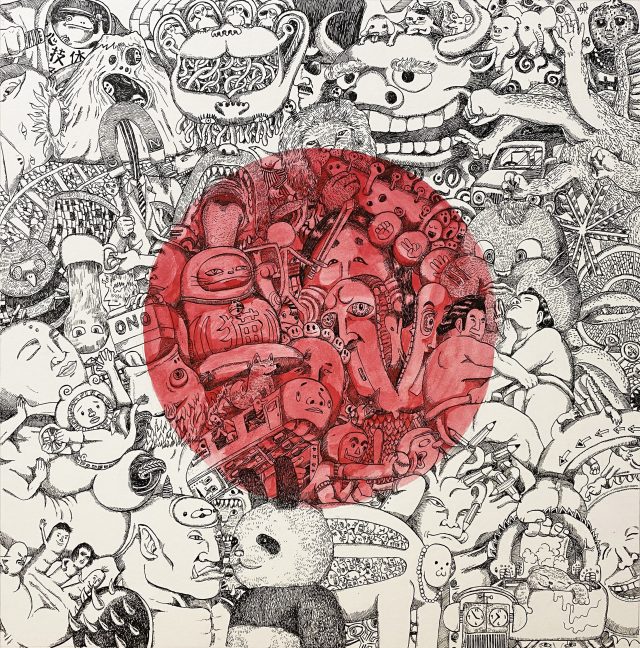 I continued to spend days with the itching feeling that I was not living the ideal vision. At such a time, I came across Ouchi Gallery and was given the opportunity to enter the world. I learned that the way people think about art is very different from Japan, and my unexpectedly high evaluations of my artworks gave me the impression that I would be able to grow if I have my artworks seen overseas rather than in Japan. The main characteristic of my artworks is that I do not have a set vision when I start drawing. It is my strength to create something unexpected. An artwork springs up in my mind, as if another me, or someone other than myself is drawing it.

I am good at drawing pictures that seem intense at first, but bring a feeling of happiness when looked closely. I would like to continue drawing artworks that bring about child-like and pure feelings of excitement. In many ways, my artworks are another me. Whenever my artworks go somewhere, it is as though a piece of me is distributed as well.