In the 40 years I have been alive, it was only recently that I understood the joys of drawing, which was also the first time in 30 years. I have been drawing since I was a child, but with only a slight desire to become an artist.

My love for art started when I was 3 years old, when I received a book that had an unique artwork in the appendix. When the paper was wetted, the artwork changed, and I remember enjoying it so much that in the end, the paper was completely worn out. After that, on the bus ride home from preschool, I learned about beauty when I was moved by a scene of the bamboo trees glowing under the evening sun.

When I was in elementary school, I started drawing on my own accords. I began by replicating manga scenes and showing it to my friends. I also received awards in sketching events, which influenced me to continue drawing.

In middle school, I learned about oil paintings through Picasso, Dali, and Chagall and began drawing it. One day, I brought my artwork to my art teacher, whose comment left a lasting impression on me. I drew the view from the neighborhood bank, but I struggled as a new artist. Referring back to it now, however, I believe it came out well despite my limited knowledge on art.

However, my teacher looked at the artwork and said, “I think it is drawn very well, but you need to suffer more…” At that time, I had no idea what those words meant.

Since then, those words have been stuck in my mind.

One day, I came across the show, “Sunday Art Museum,” where I learned about the artist, Ryo Hirano. It seemed like I was heading towards the right way. His style expressed and exposed the dark sides within and he drew with strong eyes that seemed like it would make one refuse to look. I realized that I had been looking at artworks on the surface level. I was shocked and deeply impacted and my oil paintings transformed into a dark artwork, drawn with a painting knife. However, I began rejecting my artworks and spent less and less time drawing. It was because I felt that my knowledge and life experience was not enough.

Some part of me wanted to resume drawing, but I did not have the confidence to apply to an art university. I started working and with the money, I bought magazines on art museums and art exhibition tickets, and gradually deepened my knowledge.

I wanted to resume drawing in high school, but I did not have the ability to express myself. However, I had a sketch of an artwork that I had been working on forever. I finished it at the age of 22 and the complete artwork was of a person eating a hotdog while looking at the hung livestock in the slaughterhouse. It was a subjective composition with a hint of black humor. It was only recently that I found out that this technique was used by the philosopher Mach. 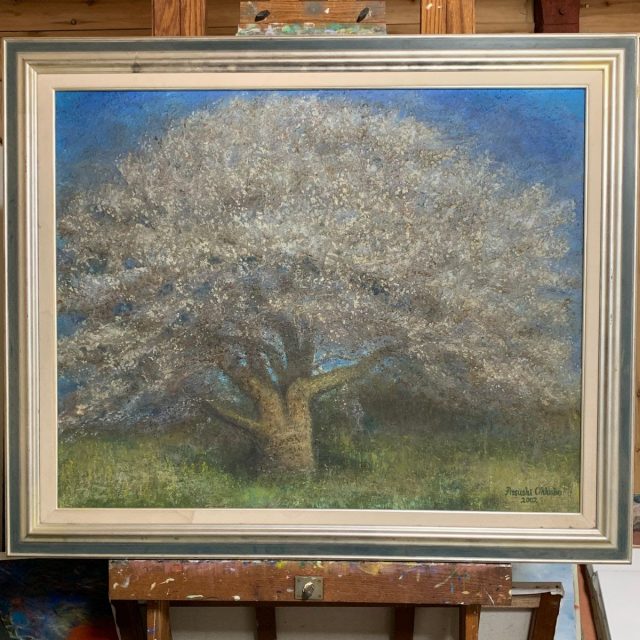 Around this time, I also came across the most important phrase for me as an artist. It was words from the Japanese painter, Togyū Okumura who said, “Completion is not possible in art. It depends on how big you finish the incomplete piece.” Since then, these words have been my biggest motive.

In the spring of 2001, the neighborhood sakura tree suddenly bloomed and with my No.30 canvas (about 91×91 cm), I went to sketch the scene. I completed it the following autumn and entered it in the town artwork exhibition. From this, I joined the local painting club and gradually increased the time I spent on creating.

I eventually began entering public exhibitions, opening a solo exhibition at my local gallery, joining a research group for drawing people, joining group exhibitions, painting live at music events, and other activities in order to gain various experiences. Even though not much time was spent on art, I believe I was able to gradually grow through the experiences and the many encounters.

I had many worries and doubts about continuously drawing and I was unable to simply enjoy the time I spent on my artworks. However, being able to have a lot of people see my artwork by joining JCAT and social media, allowed me to recently understand the joys of art.

While there were many painful experiences, it is true that I was saved by immersing myself in art.

If I were to analyze myself, I believe I am the type that flourishes when I seek different styles and experiences.

Currently, it is difficult for me to spend all my time on art, but I would like to continue doing my best.