Born and raised in a country blessed with traditional culture, my dream is to give back to Japan and all it’s done for me. I want to introduce the familiar books I have read as a child, the suiboku-ga (ink painting with just sumi-ink), bokusai-ga (ink painting with sumi-ink and other pigments), and tenkoku (seal-engraving) I learned as an adult, and enrich and diversify this world.

As the aging population, advancing information system, and economical development in Asian continues, Japan seems to be losing itself and it’s direction. What can be a tool to regain the confidence of Japanese people and introduce them to the world? The culture, cultivated by the rich nature and history of Japan, is certainly that tool.

I hope to become an artist that introduces my accomplished painting and calligraphy works to the world, while further developing Japanese traditions through interactions with people of various ethnicities and cultures.

7 years ago, while I was drawing shrines and temples as a way to unwind from work, I was drawn to the Myorenji Temple. The camellia, hibiscus, red spider lily, magnolia, and other seasonal flowers created a relaxing and serene ambiance around the temple. I thought to myself, “this has to be my (sacred) power spot,” and began visiting every time the seasonal flowers bloomed.

As I drew each flower, I combined it into a single piece and mounted it on a scroll. I bestowed the completed artwork to the temple. It was placed in the tokonoma (an alcove) of the shoin (study or drawing room) as a permanent display. It has been decided, however, to be stored for preservation in the coming years.

3. The early plum blossoms at Myorenji

There is an old tree in the inner court. During the cold month of March, this tree endures the frigid conditions and blossoms with purely white plum flowers. In a subtle way, this old tree seems to emphasize its strong will to live.  I sat down on the cold floor and endured the cold weather with the plum tree, as I engrossed myself in sketching. After returning home, I drew a suiboku-ga on a scroll, while the coldness still lingered through my body.

I exhibited this artwork in August 2018 at JCAT’s We Exhibition. It was eventually bought by a pilot. It was not only my first time having my piece bought overseas, but also my first time exhibiting abroad, so I spent that night unable to sleep from the excitement.

Some time passed, and for a long time, I did not visit the Myorenji Temple. I wanted to sketch the magnolia flowers that bloom during the early spring, so I called the temple. The person who usually works at the office of the temple picked up and told me this in a sad tone: “That plum tree started withering. The gardener removed it.”

I was overwhelmed with a feeling of sadness when I realized that I would never be able to draw the plum flowers. However, the same worker told me the following: “A few days ago, a newly wed couple visited the temple to take some pictures. When they heard that the plum tree was gone, they expressed their disappointment. So I told them that this plum tree may be gone, but an artist came to draw it once and it now lives on in the home of a well-established American gentleman.”

I felt an indescribable surge of emotions. I was glad that I was involved in art. It was a moment that made me realize that this was the right path for me.

4. My encounter with JCAT

I learned about JCAT in the fall of 2017. I was uploading my artworks on Instagram and saw the number of followers increase effortlessly until it went over 1000. Soon after, I received a DM from the people at JCAT, asking if I wanted to exhibit my artwork abroad. With two replies, I agreed.

After that, I was recommended a book written by the director of JCAT, Arisa Itami. The contents of the book moved me. I was mostly touched by her strong passion and philosophy. Art is not a technique. Each individual’s distinct originality is art. As soon as I read that part, my determination hardened and I decided to kick into high gear.

I mentioned my dream in the beginning. More specifically, I would like to introduce two examples. First, I would like to continue drawing the magnolia flowers at the Myorenji Temple. In the inner court, there is an old magnolia tree that is supported by a pillar. A portion of its trunk is missing and it seems like it will wither away at any moment. However, around the beginning of spring, it blossoms with purely white flowers, as if a light was ignited inside of it. I do not know since when, but I came to think that it is my mission to continue drawing the flowers before it withers away.

The other is through calligraphy. Recently, a group was created in dedication to spread the contemporary art of calligraphy to the world. They are currently growing in momentum. Contrary to the traditional form of calligraphy that aims to be exhibited at the Japan Art Exhibition, I dream of further developing Japanese traditions and knew that this was my chance. I am currently creating to exhibit my artwork at the upcoming ART SHODA FESTA exhibition in Mitaka-shi, Tokyo in July. As a member of the 99 Kokorozashi Tsuyoi group, who follows the footsteps of Yūichi Inoue (the first person to give calligraphy a global recognition), I am striving to make my dream come true. 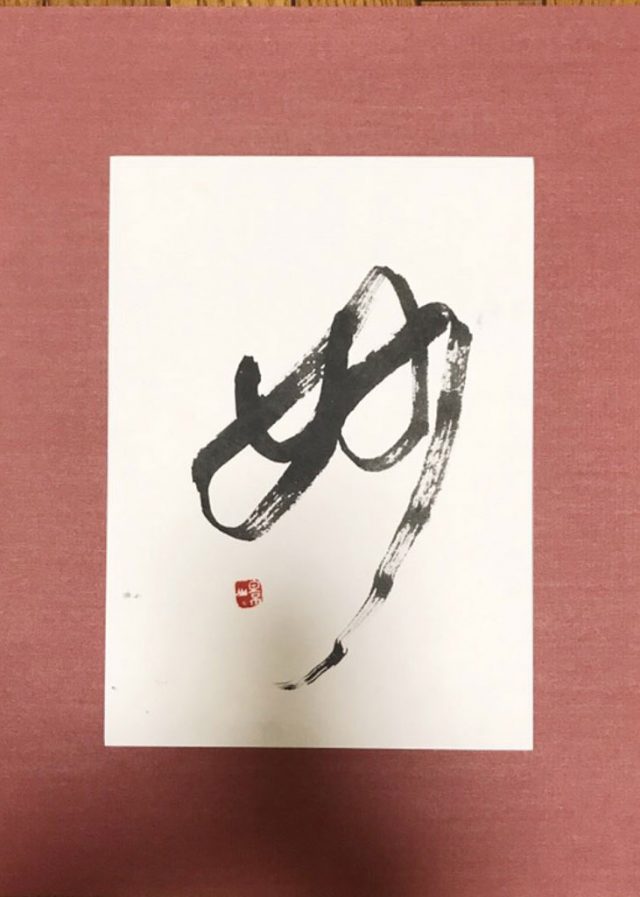