Designer, nursing assistant, I have worked in areas that were far from “art.” I started my artist activities in July 2019, but what I am about to tell you are the sequences of events that led me to where I am now. I loved to draw as a child and still do.

“In the future, I want to do a job related to drawing.” With that in mind, I entered an art-related junior college. If anything, I was not good at drawing. I often felt inferior to those around me, when I compared my techniques and color senses. I used my frustration as a motive and worked hard to grasp the concept of art.

The result was a landscape painting I drew during the summer of my freshman year. It was one of my favorite parks in the Tottori Prefecture, where my grandparents live. I chose this as my subject, and went to sketch. By putting focus on drawing a place I truly love, I was able to bring out a different level of concentration. Until then, I did not like detailed depictive artworks, but I learned the “joys” of drawing, and more so realized the “satisfaction” that I gained from it.

I continued practicing, and during long breaks, my grandparents took me to different places in Tottori, where I sketched different landscapes and old buildings. I spent most of my time drawing, and won two awards for my graduation project. I was very happy that my grandparents were happy with me, and I realized that my hard work paid off. I fulfilled my dream of doing a job related to drawing, and took a new step forward as a “towel designer.”

However, I learned about the harsh reality of a career in drawing. There were only two designers, so right after entering the company, I was treated as a work-ready graduate. I frantically learned how to do my job and spent every day in front of the computer.

The designs I created through consecutive all-nighters, were immediately dismissed, as they “don’t quite get the point.” Even so, I kept up with my work, and handled different tasks with the help of my boss and my seniors. Around the two year mark, I started questioning myself.

Where are the towels that I designed being sold? What do the consumers think about my design?

As I faintly wondered, “What do I really want to do…?” a job offer ad for Studio Ghibli caught my eye. Their animated movies have painted backgrounds that touch the hearts of people around the world. As a long-time fan of their works, This was my ideal job. But, in order to apply, the hiring schedule conflicted with my work schedule, so I would have to resign from my job as a designer.

“I will regret it, if I don’t try.” I was determined to give it a try and explained my intentions to resign from my job. Until my resignation date, I continued my job as a designer, while working on my submission piece. Taking time away from my sleep schedule, I was worn out by the time I finished, and the final piece was worse than anything I have ever created. Needless to say, I was rejected from the position.

My grandfather tried to cheer me up, when he saw my disappointment, “You are talented. Someday, I want you to become an artist who makes people happy.”

Those words left no mark on the person I was at the time. “I don’t want to draw anything right now.” I was completely disheartened, and in order to figure out my purpose in life, I started thinking of doing a job where I have “a solid sense that I am helping someone.” I then started working as a nursing assistant.

My workplace was a big hospital with a lot of patients. Everyday was hectic and busy, That I forgot that I was feeling down. I was positioned at the blood sampling room, where about 700 patients had come and gone everyday. It was not an exaggeration to say that it was a warzone.

There were times when I panicked from the chaos, And got yelled at by patients. I eventually got better at my job, and was entrusted to do more responsible tasks. I was able to relax, And interacted more joyfully with patients.

One day, a female patient told me, “You are a kind-hearted person. There is a certain charm about you.” It was the first time I was praised for my interaction. More and more patients expressed their appreciation. For the first time, my job felt worthwhile. 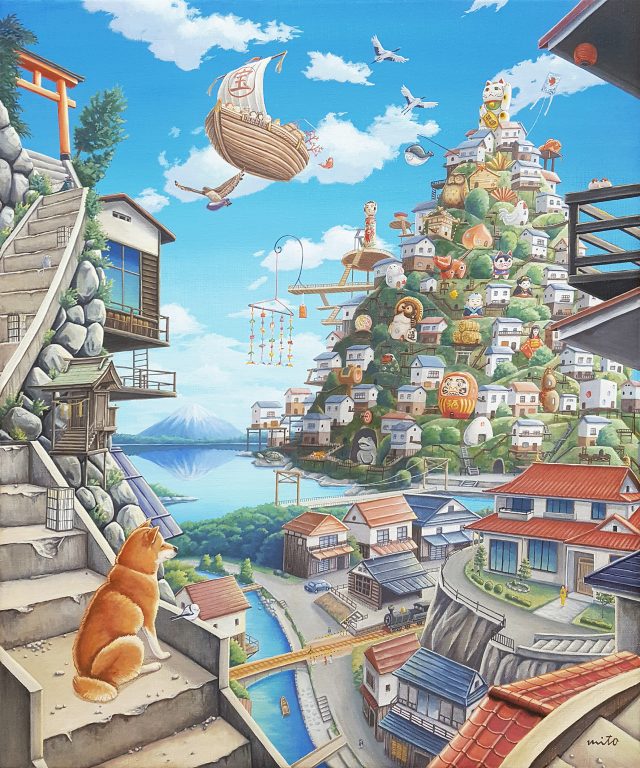 Something to bring luck

And I started understanding what I really wanted to do. “I want to make people happy through my art.” I realized that I was already thinking like so when I felt myself wanting to draw again. Fortunately, around the same time,  I was invited by an artist friend to join a group exhibition.

In July 2017, I exhibited my first piece as an “artist.” I had fun painting it. I was even able to sell the piece, And was ranked 1st place in the second category visitor’s questionnaire. “My artwork was accepted.” The first people I wanted to tell this happy news to, were the two people who always supported me: my grandparents in Tottori.

However, it was not possible. This was because, My grandfather in September 2018, and my grandmother in March 2019, passed away after their battle with illnesses.

If they were alive for just 1 more year…

I wanted to tell them in person. My grandparents, who were always bright and positive. They would have never allowed me to mourn like this. The start of my art activities might have been something that was pushed to me from heaven.

“I have to look straight forward.” With appreciation for those who have been supporting me, I have decided to move forward as an artist.

“I want you to become an artist who makes people happy.”

I had a sudden recollection. It was my grandfather’s wish and my dream. I am currently trying to make those words into reality. I want to create artworks that people around the world can enjoy, And continue channeling comfortability and inspiration through my pieces.